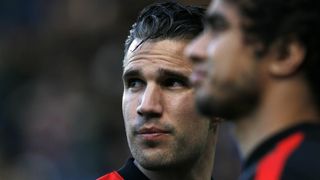 Robin van Persie revealed he is evaluating his future at Manchester United, with the welfare of his family key to any decision.

Van Persie is about to enter the final season of his contract following a disappointing campaign at Old Trafford that only yielded 10 goals, while Louis van Gaal has been linked with a host of new strikers.

Italian champions Juventus and Turkish giants Fenerbahce have emerged as suitors for the 31-year-old, who is likely to be given a reduced role at United next term.

Van Persie admitted his future in Manchester is up in the air.

"It's a strange, difficult situation. A new situation, that's a better word. I have to think in a realistic way," said Van Persie, who is preparing for Netherlands' international friendly against United States on Friday.

"The club is doing that [evaluating] as well. I must consider what I really want.

"If I contemplate the negative and say I won't play much next season, that wouldn't be good for me with Euro 2016 coming up.

"It's my ambition to play the next years. I'm thinking about my family and my children with every decision I take.

"These are very important for me. I'm a real family guy. I think it's fantastic to see how happy my children and wife are. That's something I take into consideration when I'm thinking about my future."

"I have to deal with that. I made that choice and must accept the consequences."