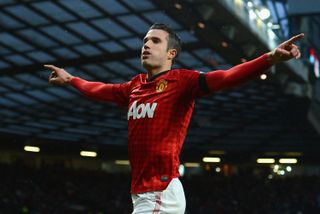 The Netherlands international made the switch to United from rivals Arsenal in August 2012, and scored 26 Premier League goals in his debut season to help his side to the title.

The 30-year-old has three years remaining on his current deal, but he hopes to stay at United for the foreseeable future to add to his medal haul.

"I have three more years to go and I would like to stay longer," he told MUTV.

"I want to play as long as possible at the highest level. Winning trophies is what it is all about."

David Moyes' side begin their UEFA Champions League campaign when they welcome Bayer Leverkusen on Tuesday, and Van Persie is keen to atone for last year's defeat to Real Madrid in the Round of 16.

He added: "It is probably my only regret about last year.

"The referee played an important part but I should have scored at least one or two goals in those games.

"I didn't, which I don't like. I have to improve on that. Hopefully we can do better this year."