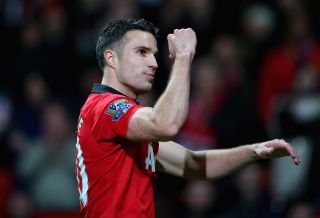 The Premier League's top scorer for the past two seasons was ruled out for a month on December 13 after picking up a thigh strain.

However, Moyes has now hinted the Dutchman could make his comeback ahead of schedule, although Van Persie is unlikely to feature in Thursday's match at Hull City.

"Robin is progressing, he's coming on, and he is feeling quite good," Moyes told United's official website.

"He had a similar injury at (former club) Arsenal on his thigh, so it is something we have to be sure about (before he returns).

"It wouldn’t be much good if it got repeated, so we will try to take it steady.

Asked whether the Hull game would come too soon for the striker, Moyes replied: "I think it probably will be.

"Obviously the medical team are controlling him, but we speak to Robin as well about how he feels and what he feels he needs to do.

"We're doing everything we can to make sure he's well looked after and well treated."