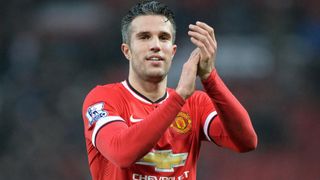 The Netherlands international played the entirety of that victory, but left the Liberty Stadium in a protective boot and has missed every game since.

Manager Louis van Gaal suggested last week that his compatriot would not be fit for Sunday's derby against Manchester City, although his improved fitness will likely serve as a fillip regardless.

Van Persie tweeted on Wednesday: "Back to training with the group today. Was a great session. Happy to be fit and able to play again. Looking forward to my next game!"

United have won all but one game since Van Persie's injury, with Wayne Rooney and Juan Mata helping to provide the attacking threat in the Dutchman's absence.