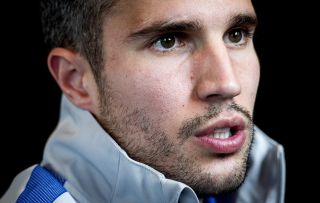 United manager David Moyes used Wednesday's 1-0 home win over Real Sociedad in the UEFA Champions League as an opportunity to give the striker a rest after he recently struggled with a hamstring and toe injury.

Moyes admitted it was a gamble to leave the 30-year-old out of the Sociedad game, but is tipping last season's top scorer in the Premier League to make a comeback against a Stoke side without a league win since the end of August.

"Robin, I hope, will be fit for the weekend," said Moyes.

"He's had a couple of niggling injuries even before they went on international duty and they have all just caught up on him a little bit.

"I felt if I could get the chance to give him a breather a little bit I would do. Fortunately for us it worked out fine."

Van Persie took his tally for United in the Premier League to four goals in last Saturday's 1-1 draw with Southampton.