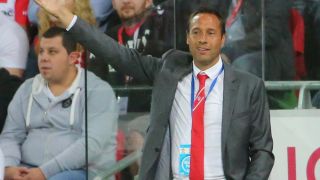 The Dutch manager also had his say on the game's controversial refereeing decision, stating that Besart Berisha's red card was unfortunate, but understandable.

The performance against Brisbane was not up the standards required in the A-League, according to van 't Schip, especially considering the Premiers' Plate winners were a man down for most of the second half.

Asked how the Heart must approach the rest of the season now that finals football is out of the question, van 't Schip said he wanted to see progress.

"We have to improve," he said.

"Because with this team we are going to be playing next year as well, adding hopefully some quality players to lift the team, but almost all the players that were on the pitch today are going to be there.

"We have to get the level higher, because this is not what we want, not good enough.

"And even if it's against the champ, they're a good team, but the way we conceded the second goal was unacceptable."

As for the 49th minute incident which saw Berisha dismissed after lunging for a ball and catching Heart goalkeeper Tando Velaphi in the head with his studs, van 't Schip said there was no intent to do harm.

"What I could see on the screen, I think it was not on purpose," he said.

"But if you look at it, he comes with his shoe and the goalkeeper has marks (on his face) so there was clearly contact.

"But it was that his foot came off the top of the ball, which is why he probably didn't have the control over it.

"I can't say anything too much... he's very unlucky but he maybe has to be a bit more careful. It's not the first time, of course."

After Roar coach Mike Mulvey hinted that Berisha is sometimes targeted by referees due to his reputation, van 't Schipp said the striker just needs to be more careful.

"Let's hope it's not that way," he said. "Looking at the footage, what can you make of it?

"It's hard for Berisha of course. But we're also happy that Tando is not injured. He has some marks but he's OK."