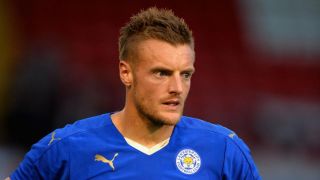 Leicester City and England striker Jamie Vardy has issued an apology following allegations he racially abused a man at a casino last month.

A video obtained by The Sun on Sunday allegedly shows the 28-year-old, whose Leicester strike partner is Japan international Shinji Okazaki, repeatedly referring to a fellow punter as "Jap" in the early hours of July 26.

The reports also claim team-mates David Nugent and Ritchie De Laet were present and tried to calm Vardy, who is said to have later become embroiled in an argument with a second man.

"I wholeheartedly apologise for any offence I've caused," Vardy said in a statement. "It was a regrettable error in judgement I take full responsibility for and I accept my behaviour was not up to what's expected of me."

Leicester, following calls from anti-racism group Kick It Out, have vowed to investigate the incident.

"We expect the highest standards from our players on and off the pitch and for them to set an example as role models in our community," said a club spokesman.

"We have noted Jamie's apology and will begin a process of investigation into the incident imminently. There will be no further comment until this process has concluded."

Vardy scored the opener as Leicester beat Sunderland 4-2 on Saturday.