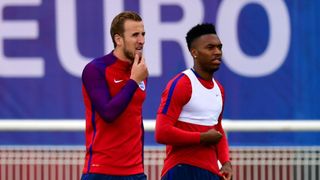 Roy Hodgson claims he is not concerned about the form and fitness of Harry Kane but acknowledged Jamie Vardy and Daniel Sturridge are pushing to start England's Euro 2016 match against Slovakia.

Vardy and Sturridge both came off the bench to score in the 2-1 comeback win over Wales following a second consecutive below-par display from Kane.

Hodgson, though, insisted the Tottenham striker's apparent struggles are not an issue ahead of the Three Lions' final Group B match in Saint-Etienne on Monday.

"I don't think it's absolutely necessary," he told a news conference on Sunday, when asked about potential changes.

"The players are in good shape and it won't be a problem to keep the same side. But there are other players knocking hard on the door, anxious to get their chance and show what they can do. It's a question of what we'd like to do, rather than what we have to do."

Pressed on whether he has specific concerns about the condition of Kane, who has failed to replicate his impressive club form at the tournament, Hodgson replied: "No I don't. I have spoken to Harry. He's been very good in training the last couple of days.

"I don't think he's suffering more than any other player. No problem with him in that respect.

"As for Jamie and Daniel - I'm sure they'd like another chance too. It's a decision that has to be made."

The England manager also responded to comments by Football Association chief executive Greg Dyke, who suggested to the BBC Hodgson may have to guide the team to the quarter-finals or even the last four to earn a contract extension.

"It's been raised many times before," he continued.

"It doesn't make any difference to me to be honest. My contract runs out after this tournament. It's a fact everyone knows. Nothing changes in that respect.

"There's only one thing on our mind ... to see how far we can go. We concentrate on what we can do. That's what we'll keep on doing.

"The FA will need to make a decision with regards to what they want to do.

"All we can do is prepare football teams. Success could depend on many things. We could play badly, look like a poor team and sneak through. Or you could play well and fall foul of something like we did against Russia," he added, referring to the late goal England conceded to draw their opener 1-1 in Marseille after dominating at Stade Velodrome.

"Does that mean we're doing very badly? As coaches all we can do is work hopefully. And then the people that make the decisions will decide if the people they've got leading the team are the right person."