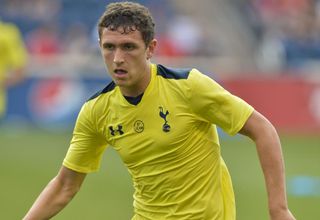 The 19-year-old defender made his Premier League debut in the 5-1 thrashing of Sunderland towards the end of last season and also played in the final game of the campaign, a 3-0 win over Aston Villa.

Veljkovic is yet to feature under new boss Mauricio Pochettino in the league, although he did make a late appearance as a substitute against AEL in the UEFA Europa League play-off round.

The Serbia Under-21 international will join Tottenham team-mate Ryan Fredericks at the Riverside Stadium, with the deal set to expire in mid-January.

Veljkovic trained with Middlesbrough for the first time on Thursday ahead of their trip to Brighton and Hove Albion on Saturday.

"Middlesbrough manager Aitor Karanka called me to talk about the possibility," he told Telegraf. "I am happy to get the chance."

Middlesbrough are enjoying a six-match unbeaten league run that has lifted them to fifth in the second tier, just one point off top spot.