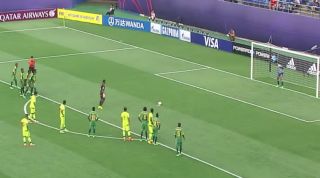 Venezuela were cruising in their Group B U20 World Cup match against minnows Vanuatu on Tuesday, leading 2-0 at half-time and then grabbing another within a minute of the restart through Watford forward Adalberto Penaranda.

Ten minutes later, things got worse for Vanuatu when they conceded a penalty as full-back Reginold Ravo handled in the box.

Taking La Vinotinto's penalty was goalkeeper Wuilker Farinez. The 19-year-old stepped up with confidence and went straight down the middle, sending it through opposite number Andreas Duch's legs.

Farinez had apparently taken a few penalties for Venezuela in their warm-up matches, and could be following the likes of Rogerio Ceni, Jose Luis Chilavert and... erm, Johnny Vegas (yes really) in becoming the latest South American goalscoring net-minder.

Venezuela won 7-0 in the end, and now top the group with six points, crushing any chances of Vanuatu qualifying for the knockout stages. Meanies.