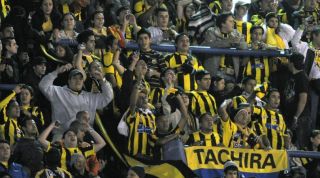 Daniel Farias' Tachira were clinging onto top spot after failing to win in two league matches, but that changed with a 3-1 victory at struggling Deportivo Petare.

Tucanes had been closing in, only to be beaten as Deportivo La Guaira jumped into second and a point adrift of the leaders.

At the Estadio Olimpico de la UCV in Caracas, Tachira made the start they needed when Cesar Gonzalez struck from the penalty spot in the 11th minute.

But Angel Osorio restored Tachira's lead just before the break and Gonzalez sealed the win in the 80th minute to see Farias' men return to form.

Deportivo La Guaira bounced back from their loss to Caracas with a 1-0 victory at home to winless Zamora.

Imanol Iriberri's 75th-minute goal was all the hosts needed to win for the sixth time in nine league games.

Tucanes had claimed back-to-back wins before a thrilling 2-1 loss at fourth-placed Deportivo Anzoategui.

Sergio Golindano had Tucanes on track and they were leading into the final five minutes, only for William Diaz and Edwin Aguillar to score and snatch three points for the hosts.

Deportivo Lara played out their sixth draw of the season with a 0-0 result at home to mid-table Caracas.

Carabobo and Zulia drew 1-1, Aragua fought their way past Estudiantes de Merida 3-1 and Atletico Venezuela were 2-0 victors at home to Portuguesa.