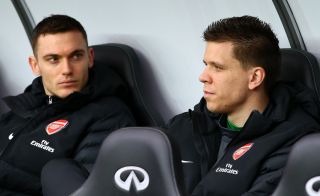 The Belgium international defender is club captain at the Emirates Stadium, but has slipped behind Per Mertesacker and Laurent Koscielny in Wenger’s central-defensive pecking order.

And Vermaelen, who is currently away on international duty, has indicated he may seek pastures new in the January transfer window as he looks to secure a place in his country’s squad for next year's FIFA World Cup.

"I'll have to think about that when it's necessary. January is still a few months ahead," the 27-year-old said.

"Of course, never playing will not be the ideal situation for me to go to the World Cup, that's for sure."

Former Ajax man Vermaelen, who joined Arsenal in 2009, went on to insist he is not yet worried about his lack of first-team action and pledged to try to force his way back into Wenger's plans.

"People ask me if I panic because I'm not playing a lot but I'm not," he added.

"I have spoken to the manager but it will remain private between us. Things can happen in a split second and change my situation. That can happen tomorrow or next weekend.

"In that case, we will speak differently in January. I have to be ready for that."

Vermaelen was an unused substitute for Belgium in their 2-1 World Cup qualifying victory in Croatia last Friday, a result that secured their place at Brazil 2014.