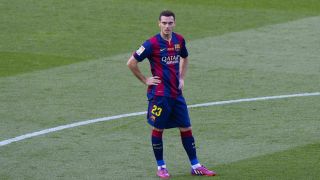 Luis Enrique has insisted Thomas Vermaelen is a key player for Barcelona in the wake of Wednesday's 2-0 Copa del Rey win over Espanyol.

The Belgium international joined Barcelona from Arsenal in August 2015, but made just one appearance in all competitions in his debut season due to recurring physical problems.

He has featured more regularly this term, though, starting in Barca's two most recent games and Luis Enrique is pleased with the defender's contribution.

"Vermaelen is a top class player," the Barcelona coach said at a news conference.

"He is doing really well and looking after his fitness. He is really taking the chances he's given and performing very well.

"He is a very important player for Barcelona."

The 30-year-old has made 13 appearances in all competitions for the Catalans this term, scoring once in the process.