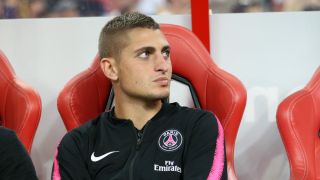 Marco Verratti has been caught drink-driving and faces a club punishment, Paris Saint-Germain announced on Friday.

Italy international Verratti was stopped by police on Tuesday, with PSG subsequently revealing the sanction he would face.

"On the night of October 30 to 31, Marco Verratti was subjected to a roadside check in his car, which showed a blood alcohol level higher than the limit allowed for drivers on probation after recently obtaining their driving license," PSG said in a statement.

"The next day, our player made a spontaneous apology to the coach and the management of Paris Saint-Germain.

"Under the rules applicable to the contracts of all our players, Marco Verratti will be deprived of a portion of his monthly ethics bonus, which reminds players of the exemplary behaviour that must be theirs in all circumstances with regard to their status."