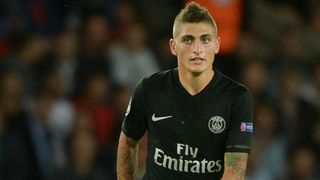 Paris Saint-Germain are in talks over a new contract for midfielder Marco Verratti, according to the player's agent.

The Italy international has established himself as one of Europe's finest young players in the French capital and rumours of a potential bid from Barcelona have persisted over the past year.

Former Barca captain Xavi said this week that he "would love" to see Verratti move to Camp Nou as he fits the Catalans' style, but the 23-year-old's agent, Donato Di Campli, insists his future is in Ligue 1.

"We're discussing an extension to his contract with PSG," he told Tuttomercatoweb.

"It's a great satisfaction, the culmination of everything that's happened since Marco Verratti arrived at Paris. We see his future at PSG, somewhere he's already committed to until 2019."

Verratti has made 16 appearances in all competitions this season.