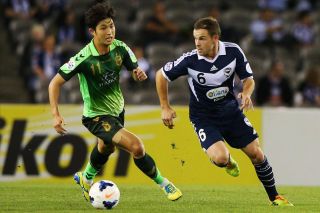 Victory led in the match through Nick Ansell's first-half header, but fell behind late in the second half after conceding twice in the space of three minutes to former Middlesbrough striker Lee.

Kosta Barbarouses equalised with nine minutes left on the clock to salvage a point for Kevin Muscat's men, who travel to Perth Glory in the A-League on Saturday before resuming their ACL campaign with a home game against Yokohama F Marinos at AAMI Park next Tuesday night.

After a sluggish start from both sides, Victory enjoyed the first real opportunity of the game in the 11th minute, and wasted it criminally. Barbarouses, onside thanks to a deflection off a Jeonbuk player, found himself one on one with goalkeeper Choi Eun Sung, but dragged his shot horribly wide.

The Korean side began to assert themselves as the half continued, failing to capitalise on defensive mistakes and firing attempts straight at Lawrence Thomas when chances to shoot presented themselves.

Ansell also had to execute a perfectly timed challenge to deny Lee Seung-Gi a good opportunity, while Leonardo also saw a vicious shot cannon off the bar with Thomas beaten.

Just when it appeared Jeonbuk's mounting pressure was about to tell, Victory opened the scoring against the run of play in the 31st minute.

A soft free-kick awarded on the edge of the penalty area presented Jesse Makarounas with an opportunity, and the fringe forward gratefully accepted it, whipping in a flat, hard delivery which Ansell met at the back post, crashing a header into the back of the net and slamming his body into the upright in the process.

Jeonbuk came close to levelling from a goal-mouth scramble seven minutes later, and were awarded a dubious indirect free-kick for a back-pass just metres out from the goal-line, which Thomas bravely charged down to divert over the bar.

The keeper was called into action again in the 41st minute, tipping over a bullet header from Choi Bo Kyung to preserve his team's slender advantage.

In sharp contrast to that flurry of activity, the opening to the second half proved even more lethargic than the first, punctuated only by a Lee Seung-Gi snap shot tipped wide of the post by Thomas five minutes after the restart, with Han Kyo Won heading narrowly over from the resulting corner.

That was as close as either side came until the 69th minute, when an Ansell slip afforded Lee Dong Gook a chance from point blank range, but he could only toe-poke the ball weakly at Thomas.

As in the first half, Jeonbuk slowly began to convert possession into chances and the breakthrough arrived in the 76th minute. Thomas could only palm Lee Seung-Gi's shot from distance back into his six-yard box, and Lee Dong Gook was on hand to tuck home the rebound from close range.

The visitors threatened to turn the match on its head when the goal-scorer doubled his and Jeonbuk's tally with an extraordinary strike from 30 metres out to make it 2-1 on 79 minutes.

Victory were not to be denied  however and, despite having previously shown almost no attacking intent in the second half, hit back two minutes later through Barbarouses.

A quick ball over the top saw the New Zealand international spring the offside trap and get in behind Park Won Jae, advancing on goal to slot the ball coolly beyond Choi Eun Sung.

And while Victory have plenty of work to do to get out of the group, their first point in the 2014 edition of the competition at least gives them something to build on ahead of the visit of Japan's Emperor's Cup winners next week.