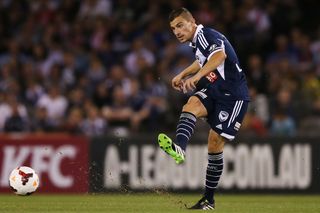 Postecoglou has firmed with bookmakers and fans alike as the obvious choice to replace the sacked Holger Osieck, and to take Australia to Brazil 2014.

Unfortunately for the Victory, that would see them lose the two-time championship-winning coach without him achieving the ultimate success in Melbourne.

But Troisi said should the former Brisbane Roar boss take his dream job, Victory would still thrive - given Postecoglou's influence on the club's culture.

"Obviously I think he's the right man. Do we want him to go? Yes and no," Troisi said on Wednesday.

"He hasn't spoken about it to us, we hear it on the TV and on the news as well, we'll have to wait and see I guess.

"The backroom staff, they all want to play the same way.

"Ange has cemented that in the mentality at Melbourne Victory.

"So obviously he's a very, very good coach, and he's going to be missed if he goes, but I'm sure someone will step in and do a good job as well."

Regardless of whether Postecoglou is the new man to lead the Socceroos, Troisi said his ears pricked up at Osieck's removal - as he believed it would lead to more opportunities for him to add to his nine international caps.

"Yeah I guess it does (open the door for selection), and in the back of my mind, it's a reason why I came back here as well," Troisi said, referring to his loan move to the A-League from Serie A club Atalanta.

"But first and foremost for me it's always been about club football, so if I'm getting on the pitch, I'm playing regularly and doing my thing, then I'm sure (selection is) going to be an option."

Troisi said he was short of peak fitness, and felt the wear and tear of their season-opening 0-0 draw with Melbourne Heart on Saturday.

"I didn't realise I was going to last that long, I could start to feel it ... I knew I wouldn't last the full 90 minutes, but that's why you have to fight through the barrier pain," he said.

"That's one of the main reasons I came back here, speaking to Ange, my intention's to play 90 minutes week in, week out.

"Obviously it's going to take a bit of time to get my match fitness up, but that's what I'm here to do."