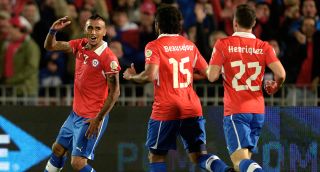 A win for either team in Barranquilla on Friday would secure their place at next year's showpiece in Brazil.

Colombia currently occupy second spot in the CONMEBOL group behind Argentina, who have already qualified, while Chile are two points behind their next opponents in third, with the top four certain to progress.

After reaching the second round of the 2010 World Cup in South Africa, Chile are excited by the prospect of making it to the finals once again.

"Of course there is anxiety; it is a fundamental game for us," said Juventus midfielder Vidal.

"We are close to something historic, qualifying twice for the World Cup.

"We have a very difficult rival, which is Colombia. They're in a little bit of a better position than us but it's a really important game, so we are keeping our enthusiasm up so we play at 100 per cent."

Chile goalkeeper and captain Claudio Bravo is confident his team will handle the big occasion in Colombia.

"The anxiety is part of this," he added. "We are very accustomed to living in these moments. A qualifying game is much more important than a regular club match."

Despite the prize at stake, Colombia boss Jose Pekerman expects an entertaining encounter.

He said: "The match should be one of the most exciting in the qualifiers because of the way we and Chile play.

"In general, the players are in good form. We have to adapt to what we want to do and we have to be clear when we begin a match and know what type of game we want to play."