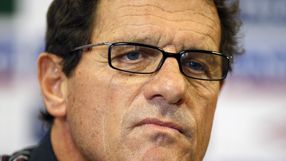 The Italian manager also said that he would consult the team doctors over whether to take players struggling with injury – and revealed that England players practise penalties constantly.

Asked if his England team can win the World Cup, he responded "Why not? My target is to play in the final. I think our team is really good.

"I'm really happy now with the England team, with the players. We always have to improve but I think if all players are fit for the World Cup we can beat all the teams."

Capello said he would take expert medical advice before deciding whether to take players recovering from injury. Wayne Rooney, Rio Ferdinand and Ashley Cole are among the regular squad members who have been on the treatment table this season.

"Here I will do the same: I have to speak to the doctors and if the players will be fit they'll stay with us. The players with an injury or with some problem will not stay with us, because I prefer a fit player to one who's not fit.

"We have to speak with the doctors. The doctors can tell me 'Fabio, in two days, three days, he will be fit' - but in two weeks, no."

WINTER BREAK TO 'RECOVER THE FORCES'

Capello was firm in explaining his belief that domestic football needs a winter break to allow players to recharge their batteries - or "recover the forces," as the Italian puts it in his ever-improving English.

"I hope that in this month before the first game we can recover the forces," said Capello. "English players arrive [at the World Cup] a little bit tired, but I think in one month, with the doctors and different training, we will be fit for the World Cup.

"I want to speak about the German teams. When you play the Champions League at the beginning of the season German teams are not good. Bayern Munich qualified for the quarter-final in the last game they played.

"But into spring and the end of the season it's really dangerous to play against [the Germans] because during the winter they stop the Bundesliga for a month. They always recover their forces and it's really good for the players."

BECKHAM WELCOME TO COME ALONG

One player who won't be fit is David Beckham, whose torn Achilles has ruled him out of World Cup action - but may still go along for the ride.

Capello gained respect for the former England captain while managing him at Real Madrid, later recalling him to the national squad and giving him enough caps to break Bobby Moore's outfield record. And he has invited Beckham to come along to the squad's training camp as a non-participant.

"We invited him to stay with us in Rustenberg but we have to check his situation physically with his doctor," said Capello. "If he stays with us we're happy because he's good in the dressing room – he respects the players and the players respect him."

England's last two finals appearances have floundered following penalty shootouts, but as a proud Italian Capello shares their pain - the Azzurri went out of Italia 90, USA 94 and France 98 on spot-kicks.

And the manager warns that while players can practise all they like in training, it's a completely different matter in the pressure of a real game.

"We practise during training, every time we stay together," revealed Cap