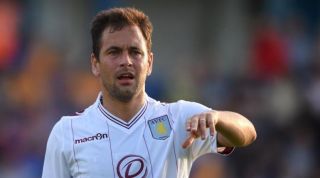 After being released by West Ham at the end of last season, Cole, 32, signed a two-year deal with Villa.

He could be set for his Villa debut against Newcastle on Saturday after overcoming a thigh problem.

Lambert believes he has seen enough from Cole in training to suggest the former Chelsea and Liverpool man can have an impact.

"I have seen Joe in training and already know exactly what he is capable of," he said.

"He has been there and done it – he is a big asset to us. Joe has won everything in the game. He is a top pro and a top guy, but he can also play a pass.

"He is very intelligent and if you can keep him fit you have a right top player.

"Now we have to try to get the best out of him."

Villa, who opened their campaign with a 1-0 win at Stoke City, got further good news on Thursday by appointing Tom Fox as chief executive.

Lambert said it was a much-needed appointment by chairman Randy Lerner.

"I've not actually spoken to him [Fox] but I know Randy has been a massive advocate of him and obviously his record at Arsenal [as chief commercial officer] has been huge," he said.

"He's come from a really good club and I'm pretty sure he will benefit this club.

"We've needed somebody since Paul Faulkner left. It has been hard over the past couple of months not having any chief executive here.

"But now Tom is coming in and it will be great for the football club."