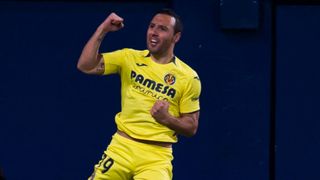 Santi Cazorla scored twice as Real Madrid failed to take full advantage of their game in hand on LaLiga leaders Barcelona in a frustrating 2-2 draw at relegation-threatened Villarreal.

Los Blancos, back in action for the first time since winning the Club World Cup, appeared to be headed for three points as Karim Benzema and Raphael Varane cancelled out Cazorla's crisp early opener by the 20th minute.

But with just eight minutes remaining, Cazorla ghosted in to head Pablo Fornals' teasing cross past Thibaut Courtois to secure a share of the spoils.

Madrid are consequently fourth and seven points behind leaders Barcelona after 17 matches, while Villarreal are out of the bottom three but remain level with 18th-placed Athletic Bilbao.