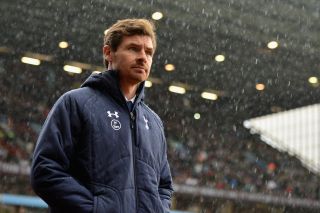 Townsend is in a rich vein of form after scoring on his England debut against Montenegro at Wembley before helping Tottenham move fifth with a 2-0 win over Aston Villa on Sunday.

Villas-Boas believes the 22-year-old will continue to grow and improve as a player.

"He is a player high on motivation so he wants the ball and has no fear to show for the ball," the Portuguese said.

"He is learning different parts of his game and getting to know his colleagues a bit better and I think his performances can improve with time. It was great to see him out there.

"He has to cope with the amount of public attention that he gets but he is very grounded and down to earth so I don't suppose he will have any problems with that.

"It is down to his ability, his drive, his motivation to do well."

Villas-Boas named Aaron Lennon among his substitutes, with the 26-year-old going on to make just his second Premier League appearance of the season following a foot injury.

The Tottenham boss insists competition for places on both wings can only be a positive for the team.

"We have five wingers for two positions, so the competition is very very high," he continued.

"The players know they cannot drop their performance so it is with performances like this (Townsend's) that you are able to keep your place."