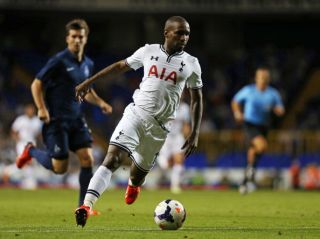 Defoe had not started a game for Tottenham this season before Thursday, due to the arrival of ex-Valencia striker Roberto Soldado to White Hart Lane.

But the 30-year-old English forward made the most of his opportunity in Villas-Boas' starting XI, scoring two goals in the first half as Tottenham won 3-0 in London to advance to the UEFA Europa League group stages with an 8-0 aggregate victory.

Soldado was left on the bench against Tbilisi, while midfielders Paulinho and Etienne Capoue, plus regular goalkeeper Hugo Lloris, were also rested.

Villas-Boas declared after the win that Defoe's goals and the strong performance of German midfielder Lewis Holtby, who ended the match with a goal and an assist, underlined Tottenham's improving depth.

"Jermain has the goalscoring ability and once again he proved it tonight," Villas-Boas said.

"What we are trying to do is build a strong team with strong players and everyone has to compete for a place.

"Does he have a future? Yeah, we always want to make the team stronger, so players who are in the top 10 of Tottenham's all-time scorers can only be good for the club."

Villas-Boas was also impressed by his team's focus as they did not let Tbilisi back into the two-legged play-off after a 5-0 first-leg triumph in Georgia.

"We couldn't be complacent," Villas-Boas said.

"All the boys did extremely well.

"After a 5-0 win you can come into the game with a laid back attitude. They didn't.