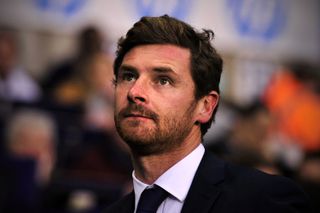 Tottenham were not at their best on a frustrating afternoon at White Hart Lane as a depleted Hull side frustrated them until Roberto Soldado scored a late winner from the penalty spot.

The victory moved Tottenham up to fourth in the Premier League table, but former Chelsea boss Villas-Boas was disappointed with the lack of support his side had received.

He said: "It was difficult to break them (Hull) down. They came here with a good strategy, which is nothing different to what teams do when they come here.

"The difference today is that we were patient. I compliment the boys for what they did, it was great work-rate.

"We didn't have the support we should have done. There was much anxiety from the stands, the players had to do it alone.

"We looked like the away team, we played in a difficult atmosphere with almost no support.

"We have a wonderful set of fans but they can do better. Away from home we play with no fear and we need that atmosphere at White Hart Lane.

"We don't need the negativity that was in White Hart Lane today."

The Portuguese also revealed that Andros Townsend was knocked unconscious after falling over an advertising hoarding.

Man-of-the-moment Townsend and a photographer needed treatment following the incident, which came just after Soldado had struck from the penalty spot.

The in-form England winger looked dazed after getting back to his feet but with Villas-Boas having used all three substitutes, he came back on to help see out the victory.

"Apparently Andros Townsend fell in a hole. He was unconscious, but he will be okay," Villas-Boas added.