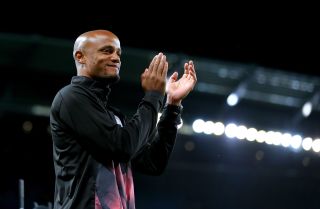 Vincent Kompany has retired from playing and been appointed full-time Anderlecht coach for the next four years.

Kompany became player-manager of Anderlecht in May 2019 after leaving Manchester City, but quickly took a step back during a difficult first season in charge.

“I want to fully commit to my role as a coach and need 100 per cent of my time and focus for it,” Kompany, 34, told the Anderlecht club website.

“That’s why I’m quitting as a football player. Our ambition and our hunger remains the same.

“I want to stay with the club for at least four seasons and prove that Anderlecht can play a modern style of football, with results. I want to thank Franky (co-manager Frank Vercauteren) for all his help.”

Anderlecht chief executive Karel Van Eetvelt added: “As everybody knows, this was always the plan.

“It might have come a little sooner than expected, but Vincent committing himself for another four seasons to the club is great news for the club, our supporters and our players.”

Kompany had a glittering playing career at City after joining from Hamburg in 2008, captaining the club to huge domestic success under various managers.

City responded to news of Kompany’s retirement by tweeting: “There won’t be another like him! Best of luck on your retirement from football, @VincentKompany.

Kompany had a difficult start at Anderlecht – the Brussels club eventually finished eighth in the Jupiler Pro League – and took a step back as head coach Simon Davies took over the match day duties.

But Davies left the club in February and Vercauteren took charge.

Sports director Peter Verbeke said: “I want to thank Franky for everything he has done for the team.

“Working with him and Vincent has been a pleasure. Our vision remains identical: a modern and technically refined form of football.

“That’s what we want to keep working on, from our youth teams to our A-team.”

Kompany’s first game in charge of Anderlecht will be at home to Mouscron on Sunday.