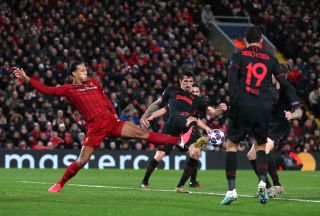 Liverpool defender Virgil Van Dijk insists their European exit will not knock the confidence of the Premier League champions-elect.

Jurgen Klopp’s side have reached the Champions League final for the last two seasons but a 4-2 aggregate defeat to Atletico Madrid ensured there would be no hat-trick.

The consolation is that the club are a maximum of two wins away from lifting a domestic title for the first time in 30 years and that is what the players will remind themselves when they reconvene later this week to prepare for Monday’s Merseyside derby.

“I think we did everything we could to win the game. We were outstanding for 95 minutes,” said the Holland captain.

“We were intense, we dominated, won the ball, won a lot of second balls and put in a lot of work and heart in the challenges.

“The only thing is we are out of the Champions League. But we are back in on Friday and then everybody has to be ready for another intense game and we will be.

“Let’s go out there and enjoy it and don’t forget why we are 25 points clear at the top.”

The performance against Atletico was similar to many of the games which have put Klopp’s team so far out of reach at the top of the table.

They had 71 per cent possession, 34 shots with 11 on target and 16 corners but found goalkeeper Jan Oblak in inspired form and it was his display alone which kept the visitors in the game during the second half, which ultimately allowed them to win in extra-time.

“We dominated the game and had the intensity that they had to deal with but they had an outstanding goalkeeper and he kept them alive,” added Van Dijk.

“He pulled off some great saves and we tried everything. The difference was their goalkeeper. He was outstanding.”

Focus now switches to the short trip to Goodison Park with the impending threat of the growing coronavirus spread bringing the prospect of matches behind closed doors ever closer.

Van Dijk said the players were not in favour of closing grounds but accepted medical advice had to prevail.

“I think the main thing is football should be played with fans. We play also for the fans, the fans pay to come and support us,” said the Dutchman.

“We need to get a good result at Goodison Park. That is going to be very tough.

“They are not in the best moment either so we will try everything to get a good result but we know how difficult it will be.”