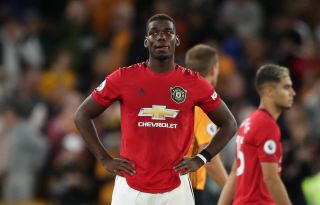 Paul Pogba wanted to leave Manchester United over the summer with Spanish giants Real Madrid interested but executive vice-chairman Ed Woodward is in contact with agent Mino Raiola about extending the player’s stay, The Express reports.

The Daily Mail also reports that Borussia Dortmund forward Jadon Sancho is set to squeeze United striker Marcus Rashford out of the England starting line-up for their Euro 2020 qualifier against Kosovo.

Manchester United goalkeeper David De Gea, 28, is close to agreeing a new contract which will be worth close to the £290,000-a-week basic earned by Red  Devils team-mate Pogba, according to The Guardian.

Spurs wanted to bring in Roma midfielder Nicolo Zaniolo, 20, according to the player’s agent before they signed Giovani Lo Celso on loan instead, The Mail says.

Jesus Vallejo:  The 22-year-old, who joined Wolves on loan in the summer transfer window, could be sold by parent club Real Madrid next summer, the Birmingham Mail says.