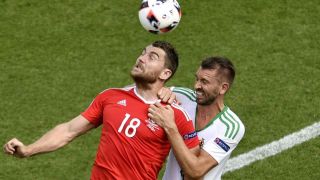 The all-British encounter threw up an attritional and largely forgettable contest but, 15 minutes from time, man-of-the-match Gareth Bale fizzed in a superb left-wing cross that forced McAuley to divert the ball past goalkeeper Michael McGovern.

"He's a great player and he's had a good tournament. It's unfortunate that it's an own goal that does it for him," said Burnley forward Vokes

"It was a tough afternoon and being a British derby probably contributed to it. I thought Northern Ireland were brilliant in the way they went about it.

"For us it was tough to break them down but it just took that one moment, I suppose, when Gareth put it across the box and that was the difference.

"Every game is different. It's tough to go into every game with the same mentality. We keep grinding out results, whether we're playing 100 per cent as we were against Russia or against Northern Ireland when we were off it a bit. We still got the result.

"It's massive. It's amazing, it's been a great journey so far and for it to continue with another game is a great feeling."

Vokes had the chance to cast himself as the hero when the deadlock remained but powered a free header from Aaron Ramsey's cross wide.

"I was gutted really, it just went past the post," he said. "It was a good chance and Aaron put a great ball in.

"It's those crosses into the box that create chances and we managed to nick the goal when Gareth put it across."

It was disappointment that did not linger for the big Welshman, unlike the emotions experienced by Northern Ireland forward Conor Washington, who replaced Kyle Lafferty with half an hour to play at the Parc des Princes,

"They had one shot on target other than [the own-goal] which is an absolute killer really," said the QPR player. "It probably would have been better if we had met France and they'd have outclassed us, it just makes it even more disappointing.

"I don't think you can lay any blame on [McAuley]. As a centre-half he has to get something on that because [Hal] Robson-Kanu's right behind him to tap it in anyway.

"Gareth's been absolutely brilliant all tournament and been a real rock for us. It's obviously disappointing for him, for the tournament to end the way it has."

On his personal Euro 2016 experience, Washington added: "The only word I can use is surreal and that doesn't really seem to cover it. I've enjoyed every minute of it other than the last couple of minutes. I'm definitely going to take this experience into the rest of my career."