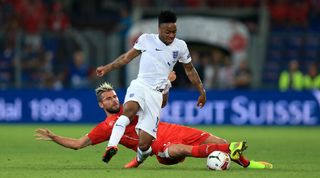 Sterling's importance in Roy Hodgson's team has grown after last season's excellent showings for Liverpool, and a promising World Cup in Brazil.

But Waddle, who won 62 caps for the Three Lions, says the 19-year-old still has much to learn at the top level, particularly in the Champions League.

"Sterling has come on leaps and bounds after 18 months but I still think he has a lot to do," the ex-Tottenham Hotspur man exclusively told FourFourTwo.

"He is not the finished article by a long way. He knows that, Brendan Rodgers will probably say that, and I think the players who play with him will say that.

"But the potential is there, he obviously played well for Liverpool season last year, had a big part in the Suarez-Sturridge partnership and came close to winning the league. He is a player who's got pace and can beat people; these are the players we need to find, and hopefully he'll develop into a top-class player."

Sterling is expected to win his 10th cap in Thursday's Euro 2016 qualifier against San Marino, a tournament Waddle believes the Reds youngster can shine in.

"I think realistically you are looking for him to do well in France in a couple of years' time," he said. "By then he'll have had three or four years' good experience playing in the Champions league with Liverpool, playing in the Premier League and for his national team.

"At the World Cup he was somebody other countries didn't really know a lot of, but he came out of it with a lot of plaudits and has definitely got the potential to be a very effective player for England.

"When you get the expectations you get that respect from other players, from team-mates and the opposition. It becomes harder because teams will close him down, mark him closer, double up on him, and then he has to add that to his game again. It's all learning for him now.