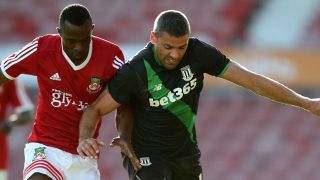 Stoke City dished out a thrashing to non-League Wrexham as Jonathan Walters scored twice in a 6-0 triumph for Mark Hughes' side.

Wrexham ran Stoke close in the FA Cup in January, taking the lead at the Britannia Stadium before conceding three goals in the final 10 minutes.

But the Welsh side had no answer to their Premier League visitors on Wednesday, with three goals in each half settling matters at the Racecourse Ground.

Diouf raced past his marker and placed the ball under Cameron Belford to give Stoke the lead after 22 minutes, with Walters' looping in the second and Van Ginkel heading the third.

Joselu picked out Walters for a 66th-minute tap-in before claiming credit for a deflected effort himself, while Daniel Bachmann - on loan at Wrexham last season - saved Kayden Jackson's penalty after Marc Wilson handled Wes York's cross.

Telford capped off a good evening's work for Stoke when the 18-year-old, a new signing from Blackpool, found the bottom corner with a left-footed strike.