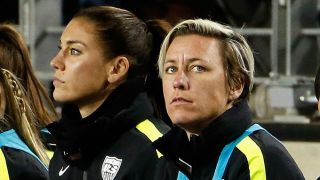 Former United States captain Abby Wambach was not a fan of Hope Solo's comments about Sweden at the Rio Olympics.

After a shock quarter-final loss to the Swedes, Solo called her opponents a bunch of "cowards", which resulted in a six-month suspension and her USA contract being terminated.

"I had big problems with that," Wambach said on the Dan Patrick Show on Thursday.

"That's like playground stuff. Be a professional. Stand up and say, 'You know what, they beat us at our own game. They played better than us today.' Call a spade a spade."

According to Wambach, she and Solo "clashed a lot", but said she was the best American goalkeeper.

"But was she difficult to work with at times? Hell yeah," Wambach said. "Was I? Probably. Because we're these big personalities.”