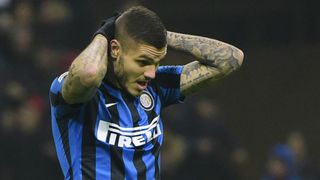 Mauro Icardi's wife and agent Wanda Nara has revealed Inter have put the Argentine forward up for sale.

Following reports in AS that Atletico Madrid had agreed a deal for the 23-year-old, Nara has spoken of the Italian club's intention to transfer her husband.

Icardi was appointed as Inter's captain at the start of the 2015-16 season, but their relationship has seemingly now soured.

"From what I can see, Inter have put Icardi up for sale," Nara told calciomercato.com. "There are many clubs interested. We will evaluate the situation with all due respect for everyone.

"Mauro would be very sad to leave Inter, but we've understood the club's economic situation and evidently they cannot hold Icardi back.

"There is no release clause in his contract and we hope Inter won't ask for a sum that is outside the market value, but rather suited to his contract."

Icardi had reportedly been hoping for an improved deal at San Siro prior to this development.