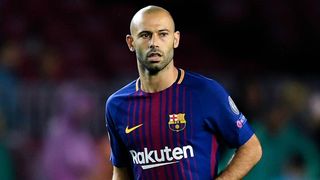 Tianjin Quanjian have dismissed links with Barcelona veteran Javier Mascherano by insisting he is "too old" for the Chinese Super League side.

Rumoured CSL target Mascherano is tipped to leave LaLiga giants Barca, having recently spoke of his time at Camp Nou coming to an end.

With game time hard to come by under Barca head coach Ernesto Valverde, the 33-year-old has been linked with a January move to China, where Tianjin have reportedly made an offer for the Argentina international.

"Those [rumours] are untrue. We have not entertained the idea of buying Mascherano at this point," a Tianjin spokesperson told Tianjin Today Evening News.

"We will aim to get better results next season and Mascherano is too old to fit in at our current plan."

Mascherano, who is recovering from a hamstring injury, has only made six LaLiga appearances this season and 10 in all competitions.