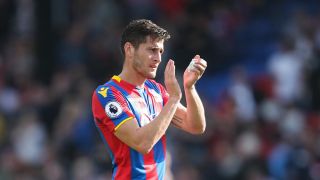 Joel Ward has agreed a new three-year Crystal Palace contract, committing his future to the club through to 2021.

Ward's 163 Premier League appearances for Palace is more than any player in the club's history and he will now have a chance to extend his record.

The 28-year-old defender started 19 Premier League games in the 2017-18 season and is thrilled to be staying at Palace.

"I'm delighted to be re-signing," Ward told Palace's official website. "I've been here for six years now and this will take me just shy of a testimonial so I'm looking forward to what the future has in store.

"There's been some fantastic moments; it's been a great ride, and long may that continue. I wanted to stay here and be a part of it as I feel at home here, and it's important for us to keep moving forward.

"I want to continue to play for this club and set that bar as high as I can. As long as I put the boots on, I'll never stop trying to better myself and raise that bar."