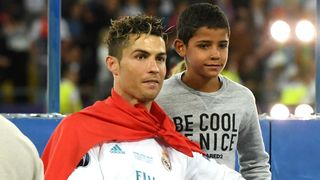 Forget about Lionel Messi, Cristiano Ronaldo might have a talented new rival for world football fame: his own son.

The Real Madrid great's eldest child Cristiano Ronaldo Jr., nicknamed Cristianinho, looks to have inherited the family knack for scoring stunners judging by his brilliant top-corner effort in a post-match kickabout on Thursday.

He received some of the biggest cheers of the night from the Estadio da Luz crowd, who earlier saw World Cup-bound Portugal ease to a 3-0 friendly win over Algeria.

Five-time Ballon d'Or winner Ronaldo senior went scoreless in his 150th international appearance, so the emergence of a new challenger – family or otherwise – might come as handy motivation on the eve of the World Cup.