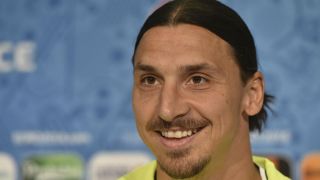 Manchester United's friendly against Galatasaray on Saturday was always likely to revolve around Zlatan Ibrahimovic as he made his first appearance for the club – and the veteran striker did not disappoint as he opened his account after just four minutes with an acrobatic effort.

The signing of Ibrahimovic, coupled with the arrival of new boss Jose Mourinho, has seen expectation levels rocket at United.

And the 34-year-old gave a glimpse of his stellar quality when he broke the deadlock against the Turkish side in the opening stages in Gothenburg.

Having taken a matter of minutes to score his first goal for the club, Ibrahimovic will be heavily tipped to enjoy another prolific season, having netted 50 goals in all competitions last term for Paris Saint-Germain.