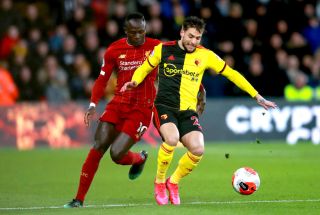 Liverpool’s unbeaten Premier League season came to a grinding halt as they were deservedly thrashed by struggling Watford at Vicarage Road.

Jurgen Klopp’s side were on a 44-game unbeaten run and the champions-elect were aiming to match Manchester City’s run of 19 consecutive wins – only to be on the wrong end of a 3-0 humbling.

Ismaila Sarr, making his first start since returning from a hamstring injury, stole the show with two goals in six minutes before he laid on the third for captain Troy Deeney – who bullied a Liverpool defence missing Joe Gomez through an injury precaution.

For a team brushing aside all-comers in the league since losing at the Etihad Stadium in January 2019, Klopp’s men were second-best for almost the entire game.

For the Hornets, arguably their most famous Premier League win was enough to lift them out of the bottom three on goal difference.

Former Everton man Deulofeu would come close again with less than 10 minutes on the clock, this time curling his effort onto the roof of Alisson’s net from a similar position to his earlier chance.

Liverpool were surprisingly sluggish in possession and Mohamed Salah lost the ball close to his own box, Deulofeu eventually crossing for Abdoulaye Doucoure, whose shot was blocked behind by Virgil van Dijk.

Salah sent Liverpool’s first effort of note into the side netting after picking up Alex Oxlade-Chamberlain’s centre but the strong wind whistling around the stadium remained firmly in the sails of the home side.

A couple of tight offsides prevented further intrusions into the Liverpool penalty area until a lengthy delay just after the half-hour following serious-looking injury to Deulofeu.

Roberto Pereyra replaced the stricken Spaniard, who was taken off on a stretcher with the whole of Vicarage Road rising to applaud him as he disappeared down the tunnel.

The best chance of the half fell to Deeney on the stroke of half-time as Alisson recovered from spilling the ball at the Watford striker’s feet to keep out his strike, with Deeney only able to drop the rebound wide.

It was a similar story at the start of the second period, Pereyra slipping Sarr in with Alisson again on hand to push his shot behind.

Liverpool finally forced Ben Foster into action eight minutes after the restart as he pushed Andrew Robertson’s low drive out and finally pounced on the loose ball.

Moments later though Watford would get the goal their football had deserved – a simple throw-in into the box finding Doucoure, who crossed for Sarr to sweep home.

Things got even better for the hosts, Sarr again the man providing the goal as he burst onto Deeney’s fine pass to lift the ball over Alisson and double the lead.

A third nearly followed but Sarr this time could only get in the way as Will Hughes looked to curl an effort in the far corner with the Liverpool defence rocking.

Klopp turned to Adam Lallana and Divock Origi and the former hit the outside of the post with his first contribution as the shell-shocked visitors looked to respond.

But instead it was Watford who would sensationally strike again, Sarr turning provider for Deeney to stroke into an open goal after Trent Alexander-Arnold gifted possession to the Senegal international.

Sarr should have wrapped up his hat-trick with nine minutes remaining but he shot wide when through on goal before he was replaced to a rapturous reception.

Liverpool could not muster up enough to pull back a late goal to make matters interesting but Klopp will see the defeat as a blip as the chance to break a number of records vanished, but a first league title in 30 years remains almost certain.