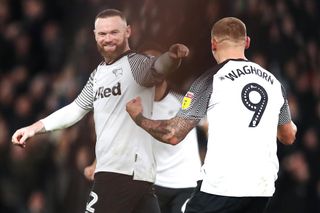 The former England striker capped an impressive Derby display with a superb free-kick after first-half goals from Martyn Waghorn and Chris Martin had put the home side on top.

Stoke were a shadow of the side that had gone four games unbeaten and conceded again when Jayden Bogle smashed a shot past Jack Butland from 20 yards to seal Derby’s fourth consecutive home win and the biggest under manager Phillip Cocu.

There was no sign of what was to come when Sam Clucas went close for Stoke in the sixth minute as he fired just wide from the left edge of the box.

Derby responded when Martin got in on the left but he delayed shooting and when the ball came to Tom Lawrence, his shot lacked the power to trouble Butland.

But Derby were enjoying a good period of possession and they went ahead in the 21st minute when Craig Forsyth whipped in a cross from the left and Waghorn dived to head in from eight yards.

Stoke were still reeling from that when they were caught cold again three minutes later when Duane Holmes burst forward and played in Martin who drove the ball over Butland from 10 yards.

Butland was relieved to see a Lawrence shot go wide as Stoke tried to regroup but Derby were pressing from the front and the visitors were making little impression.

That changed in the 41st minute when Sam Vokes played in James McClean but a poor first touch allowed Bogle to get in a block that put the ball behind.

Former Derby forward Tom Ince had a low shot turned behind in stoppage time but it had been the home side’s half and the visitors needed to improve a lot after the break.

But Derby were close to a third in the 53rd minute when Holmes sent Lawrence clear and it needed a sliding clearance from Butland to deny him.

Stoke were seeing more of the ball but Derby made the game safe in the 67th minute with a sublime free-kick from Rooney.

Lawrence was caught on the edge of the box by Josh Tymon and Rooney curled the ball over the wall and into Butland’s top-left corner.

Butland was beaten again in the 74th minute when a crossfield pass allowed Bogle to cut inside and smash a shot into the top-right corner to complete a memorable night for Derby and a miserable one for Stoke.