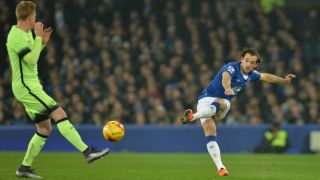 Everton travel to the Etihad Stadium with a one-goal lead after having secured a 2-1 victory in the first leg at Goodison Park, and they followed up that result with an away draw against City in the league earlier this month.

Baines said those results prove Everton has what it takes to come away with another positive result against the Premier League champions and book their spot at Wembley in the final.

"Getting to the final is massive for all of us," Baines was quoted as saying by The Mirror.

"It’s a tough semi to come through and you don’t always want to talk too much about what it might mean, because there is still a lot of work to do before then.

"But the truth of it is, we know we can beat Manchester City.

"Of course, it is easier to say than do.

"City are a top side, and I am sure they will come out fast and try to get a goal, but we will be prepared for that and we’re capable of scoring ourselves. We will be ready."

Just making the final would prove a big lift for the club who continues to suffer from indifferent form in the league, with Sunday's 2-1 home defeat against relegation battlers Swansea City keeping the club stuck at 12th in the table and 13 points off the top four.

"We have big games coming up in cup competitions. We focus on a huge game against Manchester City and hopefully we can get the fans positive again and then return to the league," he continued.

"The top four is going to be really tough – we are going to have to go on some sort of run to get there.

"If we are going to set a target then the top six is more realistic.

"There is still a lot of football to be played in the league but with the players we’ve got and the ability we have, it means we can go on a run until the end of the season."