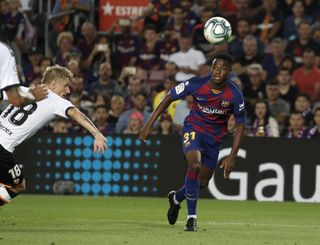 Clement Lenglet has called for Ansu Fati to be given time to mature after the teenager stole the show again for Barcelona.

The 16-year-old became Barca’s youngest ever scorer when he netted against Osasuna prior to the international break and, pushed into the starting line-up, he needed less than two minutes to find the net again.

Fati then set up Frenkie De Jong for the second only four minutes later and, although defensively they were shaky again, Barcelona went on to claim a 5-2 win.

Defender Lenglet told Movistar+ in quotes reported by Marca: “He is only 16 years of age, so we need to be patient with him.

“He makes the most of his minutes and is a great kid who deserves what’s happening to him. We always tell him to listen, work and learn.”

Fati was a threat throughout the 60 minutes he was on the pitch and could have scored again.

In the end it was his replacement, fit-again Luis Suarez, who added two more after defender Gerard Pique had tapped in the third.

The result gave Barca their second league victory of the season but they again looked shaky at the back, with Kevin Gameiro making it 2-1 and substitute Maximiliano Gomez adding a late second.

Lenglet added: “It was a good win against a tough opponent. They play football differently to us. We did things well from the start. We let in two goals again, but I think it was a good performance overall.”

It has been a turbulent week for Valencia, with head coach Marcelino axed by owner Peter Lim and Albert Celades installed in his place.

Celades admitted his side paid for poor starts to both halves, saying on valenciacf.com: “We had a start to the game where we conceded two goals very fast, and against a team like this it is difficult to turn it around.

“But the team responded well, we scored and we could have scored some more. We left with good feelings at half-time, but the start of the second half hurt us. Despite the result, we showed desire to the end and scored a goal in injury time because the players still desired.”