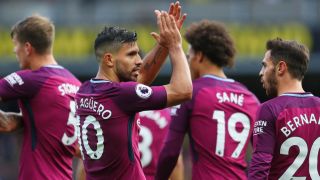 Pep Guardiola once again compared Manchester City to his great Barcelona sides after they beat Watford 6-0.

A 5-0 win over Liverpool in their previous Premier League match was followed by a 4-0 Champions League victory over Feyenoord, prompting Guardiola to reminisce about his Camp Nou reign before the trip to Vicarage Road.

A hat-trick from Sergio Aguero and goals from Gabriel Jesus, Nicolas Otamendi and Raheem Sterling left Guardiola to reflect on a week in which City won three games, scored 15 goals and conceded none.

"It was so good," he told BBC Sport. "Especially after an away game in the Champions League. The way we played as a team, we are so happy.

"I was lucky to manage Barcelona with many outstanding performances but this week has been a lot of goals. We have found our game, we can make short passes and we have a lot of energy from our full-backs.

"The people who come from the bench always give us something new. Clean sheets are a consequence of you controlling the game."

PEP: Sergio's numbers speak for themselves. I was so happy with the third goal. In the box is so clever, He has this power to do this.September 16, 2017

Guardiola revealed that the decision to let Raheem Sterling take the 89th-minute penalty after he was brought down in the box was Aguero's.

"You have to be serious until the end," said Guardiola. "Goal difference could be important but it was Sergio Aguero's decision."

He said: "We knew it would be a tough day to compete at this level but City are strong enough to create problems for us.

"The first and third goals are offside; it is not a normal game. We had a clear penalty for [Nathaniel] Chalobah. Everything is difficult for us this afternoon.

"City deserved the three points, we learn as a team. We can't make mistakes. But it's really difficult with these decisions."