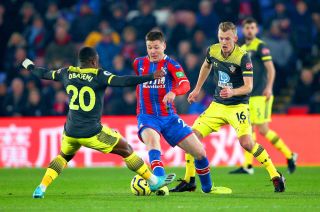 Midfielder James McCarthy made no excuses after Crystal Palace lost 2-0 to Southampton on Tuesday night.

The Eagles’ five-match unbeaten run in the Premier League was halted after goals from Nathan Redmond and Stuart Armstrong handed the visitors all three points.

Roy Hodgson’s side had held champions Manchester City to a draw days earlier, but dropped two places to 11th in the table after this result.

“Each and every one of us know it’s not good enough,” McCarthy told Palace TV. “We’ve got a lot of injuries in the squad but there’s no point making excuses.

“We’re put out there and we need to put on a good performance and unfortunately each and every one of us didn’t perform.

Palace now have a 10-day break until they return to action for the visit of Sheffield United on February 1.

The winter transfer window will be shut by then and, despite boss Hodgson repeatedly calling for additions earlier in the season, this week he has focused on players returning from injury.

Left-back Patrick Van Aanholt should be fit for the clash with the Blades after a hamstring issue and Andros Townsend and Christian Benteke will not be far behind.

Captain Luka Milivojevic will also be available a week on Saturday after serving his three-match ban for violent conduct in the 1-0 loss to Derby in the FA Cup at the beginning of January.

Saints will be in fourth-round action this weekend, with Tottenham set to travel to St Mary’s for the second time this month and they will face an in-form team.

Ralph Hasenhuttl’s side have won six of their last eight matches in all competitions and were able to bounce back in the capital after a painful 3-2 loss to Wolves last time out.

Goalscorer Redmond told the club’s website: “Tuesday night under the lights was a perfect opportunity to bounce back from Saturday’s performance.

“Everybody wants to play – the competition is healthy and I think that’s a really good thing to have at the moment.”

Hasenhuttl could be without right-back Cedric Soares for the cup tie with Spurs after he had to be substituted in the first half with a knee injury.

The Saints boss added: “I hope it is not too bad. It doesn’t look like that. Hopefully with the knee, it is a little problem. We will have a look.”