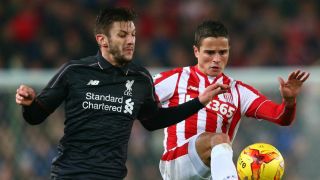 Liverpool's 1-0 win over Stoke City in the first leg of the League Cup semi-final was exactly what the fans deserved, according to midfielder Adam Lallana.

Jordan Ibe scored the crucial away-goal winner on Tuesday for the travelling side to give Liverpool a significant advantage heading into the second leg at Anfield.

Lallana said the win was the perfect response to Saturday's 2-0 Premier League loss to West Ham United at Upton Park.

"We owed the supporters that performance," Lallana told the Liverpool Echo.

"It’s a massive win for us.

"We spoke before the game about the need to start well. Against West Ham we were sloppy at the start. We wanted to show our intent against Stoke.

"We got the goal, defended really well and had chances to make it more comfortable. It was probably a perfect performance."

Lallana said the win was important for the players' confidence as well, but said the tie was far from over.

"We all knew we didn’t perform to the right level on Saturday and we wanted to put that right. We owed the fans a performance.

"This is a tough place to come. We’ve had some bad results here in the past but we dug deep and got a great win.

"We still have to finish the job off at Anfield.

"We have put ourselves in a good position. We just need to be professional in the second leg."