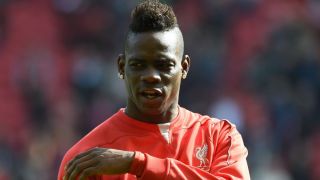 Besiktas president Fikret Orman has claimed Mario Balotelli is keen to complete a move to the Turkish champions.

The Liverpool striker has been told by manager Jurgen Klopp to find a new club after a dismal two-year period at Anfield, which has included a disappointing loan spell with AC Milan.

Balotelli has been training with Liverpool's youth side in a bid to regain sharpness, and despite some reports linking him with a return to Serie A, he has yet to find a suitor.

But Besiktas have now said they could be the solution to the Italy international's "infamous troubles" as they look to sign a replacement for Mario Gomez, who has declined to extend his stay at the club.

"Mario Balotelli is the type of footballer that our fans can associate themselves with," Orman told Fanatik. "I'm pretty sure he would attract great attention.

"To be fair, if he wasn't deemed as a trouble-maker, he wouldn't be rumoured to be joining us. But we can show some effort and create solutions for Balotelli's infamous troubles. I think he can change with the attention and care he'll receive in Turkey.

"In short, we want Mario Balotelli and he wants us too."