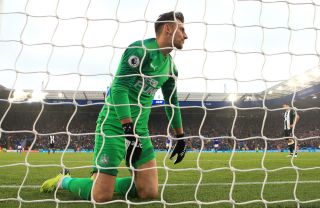 Newcastle goalkeeper Martin Dubravka has admitted he and his team-mates were “embarrassed” by the 5-0 humiliation at Leicester which set alarm bells ringing on Tyneside.

The Magpies turned in a woeful display at the King Power Stadium and capitulated in horrendous fashion following midfielder Isaac Hayden’s dismissal, sparking a grisly inquest in which new head coach Steve Bruce’s future has been called into question by some.

Skipper Jamaal Lascelles and midfielder Sean Longstaff were frank in their assessment of a dismal afternoon, and Dubravka revealed issues have been addressed in a team meeting since.

He told the club’s official website: “I agree with all of my team-mates. Obviously after the game, we felt that it was just not good enough. We felt embarrassed and I can’t even describe the feeling.

“Our fans were there to support us and we just didn’t do enough to give something back to them.

“We had a meeting and we analysed what we should do better. It’s always important to find the good things and also you need to analyse the bad things that you should do better, especially in the games that are in front of you.

“We did that, it’s gone now, and now we have to look up for the next game. I think that’s important for us.”

That next game comes on Sunday when Manchester United, who have themselves endured an underwhelming start to the campaign, travel to St James’ Park ahead of the international break.

Slovakia international Dubravka made his Magpies debut in the corresponding fixture in February last year, playing his part in a fine 1-0 victory, and a repeat could prove priceless.

He said: “Manchester United have some quality players, but obviously they are not in the best position as well, so why not try to win this game? Why not try to surprise the people who don’t think that we can be successful?

“I think every player realises he can do better on the pitch, me included. It will be very difficult, but if you win these kind of games, it gives you something special for the next ones.”