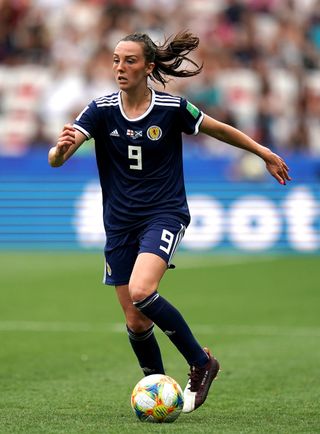 Caroline Weir is in no doubt Scotland must get something from Friday’s “huge” clash with Japan – and says they are confident they can.

The opening two matches in Group D of the Women’s World Cup saw Scotland beaten 2-1 by England in Nice on Sunday and Japan then held 0-0 by Argentina in Paris the next day.

A top-two finish in a group guarantees a spot in the last 16, while four of the six third-placed finishers will also progress.

When asked ahead of Friday’s contest in Rennes how confident she was of finishing second in the pool, Scotland midfielder Weir said: “I think that is something we need to aim for.

“Friday is a huge game for us. If we can get a result, we’ll look at that.

“We won’t focus too much on where we think we might finish, we’ll just focus on getting the results and putting performances in and not looking too far ahead, because Japan – that is a vital game for us now.

“We need to get something from that game, whether it is a draw or a win, and we’re confident we can do that.”

Japan, the 2011 winners and 2015 runners-up, are currently ranked seventh in the world, four places below England and 13 higher than the Scots. Argentina are 37th.

Weir said: “Japan are a top side. I think Argentina played well the other night.

“It’s not going to be an easy game. They have a lot of experience in World Cups.

“We know it is going to be tough but we do go into the game with confidence. I think we are more physical than them and hopefully that will cause them a problem.

“They will be favourites, as you would expect. We are happy going in as underdogs, and we know we are confident in the squad we have got.”

Just prior to what is their debut Women’s World Cup finals, Scotland beat top-10 ranked opposition in Brazil, Shelley Kerr’s side triumphing 1-0 in April.

"We've got the fitness, ability and tactical ability to compete and get victories like we did tonight."— Scotland National Team (@ScotlandNT) April 8, 2019

Twenty-three-year-old Manchester City player Weir added: “The biggest thing for us is we know within ourselves we can compete.

“It’s easy to say we have good players, but to actually go out and put performances on against these teams only gives us more confidence.

“Against England (who went 2-0 up in the first half), the second half could have been a real struggle, but we came out and showed what we are all about, we came back and got a goal and were close to getting another goal.

“That’s what this team is all about – we don’t give up, we work so hard for each other and hopefully we’ll do the same against Japan.”