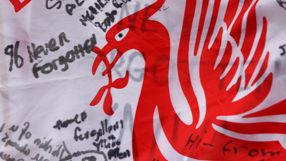 Liverpool play Everton on Saturday while Tottenham Hotspur face Chelsea on Sunday. Players from all four teams will wear black armbands in memory of the 96 Liverpool fans who died on April 15, 1989 at the semi-final at Hillsborough, Sheffield, when Liverpool met Nottingham Forest.

FA spokesman Scott Field said: "We are very respectful to Liverpool FC in regards of this weekend.

"We understand the significance and the importance to the club, the fans, the staff and of course, the wider significance of our game."

Saturday will be a particularly poignant with Liverpool meeting Everton, a day before the actual anniversary. After beating Forest in the re-arranged semi-final, Liverpool and Everton met at the old Wembley in the 1989 Cup final with Liverpool winning 3-2.

Liverpool captain Steven Gerrard and Everton skipper Phil Neville will present members of the Hillsborough Family Support Group with flowers prior to kick-off and also lay floral tributes to the Hillsborough victims at the side of the pitch.

Liverpool also paid tribute with a minute's silence prior to Saturday's home game against Aston Villa. The annual memorial service will be held at Anfield on Sunday.