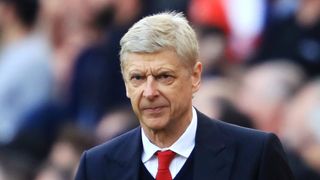 Arsenal could not afford to lose to Manchester United, according to Arsene Wenger, who dismissed their north London derby reverse against Tottenham last weekend as a "blip".

"It's between two teams at the end of the day, that's what I make of it," he told a post-match news conference, in which he highlighted the recent upturn that was interrupted by a 2-0 defeat at White Hart Lane.

"It was important because we lost at Tottenham. That didn't happen many times," he said.

"You play Man United in another big game and we could not afford to lose and we responded.

"We only had just one blip. I think it was a bit physical but overall we look a bit more stable."

Arsenal head to Southampton on Wednesday knowing victory over opponents who handily held third-placed Liverpool earlier on Sunday will lift them above United and into fifth.

More goals from Welbeck would certainly help their cause after the injury plagued striker netted for a second time in the Premier League this season, capping a dynamic display as Arsenal's attacking spearhead.

"I'm happy for Danny," added Wenger, who conceded the motivation given to Welbeck by matches against his old employers was a factor in his selection.

"You know when you play at centre-forward you want goals, so hopefully that will give him confidence."