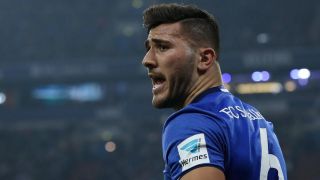 The Bosnia-Herzegovina international's contract expires at the end of the season and he has been heavily linked with the Gunners, as well as Manchester City and AC Milan.

Wenger, however, insists reports claiming that a deal has been agreed with the 23-year-old are untrue.

"We can deny that story at the moment," the Arsenal manager said ahead of Saturday's FA Cup semi-final against Manchester City. "Nothing's been concluded with anybody. I think it's important we don't talk about transfers but about the semi-final of the FA Cup."

Wenger also stressed that the uncertainty over his own future is not distracting his squad, despite the 67-year-old having yet to announce his decision over whether he will sign a new contract at Emirates Stadium.

"I didn't tell anything to anybody. My commitment is total and I'm only focused on Arsenal," he said.

"It doesn't play any part. It's a very important game for me because it's the next game and an opportunity to win a trophy. We are all fully focused on that. My future is Sunday."

Arsenal bounced back from a 3-0 loss to Crystal Palace with a hard-fought 2-1 victory away to Middlesbrough in the Premier League on Monday.

Wenger admits that confidence is still low within the squad but he insists that the players believe in their chances of reaching the FA Cup final for the third time in four years.

"I expect to go to the final," he said. "Somebody told me I played 11 semi-finals in the FA Cup and that means it's a great experience. I remember my first one against Villa Park at Wolves [in 1998]. That's the day I realised how big the cup is. It's a special experience.

"I think we are focused, highly motivated, maybe not at the maximum of our confidence but it's a good opportunity to show how much we want to go to the final because it may be our only chance for a trophy this season.

"They are a team who are very positive going forward, they like to have the ball and take initiative. We do as well. It was 50-50 on the possession front in our last game. It could be very intense, a very spectacular game once the fist goal is scored. Let's hope we score first."

Wenger, who confirmed that Danny Welbeck (toe) is a doubt and that Shkodran Mustafi (thigh) remains sidelined, hinted that he could utilise the same back-three system he deployed against Boro.

"It is an option, yes," he said. "It was to give us a bit more defensive solidity because recently we've conceded too many goals.

"I think the definition of a good football player is that he's adaptable. If you're not adaptable, you're not a top-level player.

"It's between two teams in the Premier League who are very close to each other so we know we absolutely have to be at our best."