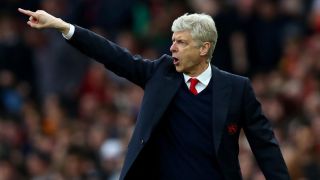 Arsene Wenger says he hates himself whenever Arsenal fail to win matches, but pointed out there are other major clubs who have also struggled to secure league titles.

The Arsenal boss has come under intense pressure with his contract due to expire at the end of the season as a top-four Premier League finish looks unlikely for the first time in his 20-year reign.

Wenger insists he is able to shelter himself from most of the criticism he receives because he does not consider negative reviews of his performance to be personal.

But he stressed that he does find poor Arsenal results difficult to cope with, despite pointing out top clubs like Real Madrid and Liverpool are also on long streaks without winning domestic titles, his side having not won the top-flight since 2004.

"I am like everybody - I prefer to be loved than hated but I can take a distance with that," he said to TV2.

"I know as well it is not the person itself, it is the fact the manager does not win the games. They want to win and I can make a difference in that.

"I don't take it too personally. In fact, I personally hate myself - the manager - more than anybody when I don't win the games. I am a very bad loser."

Wenger called for a sense of perspective over Arsenal's struggles, adding: "People want to win. If you don't win the championship, the FA Cup, the Champions League, it is absolutely disastrous.

"But if you look back in the last three years, we won the FA Cup twice and finished second, third and fourth. We are in the FA Cup final again.

"Overall, I believe we are not happy because you want to win absolutely everything. But you have to accept as well that Real Madrid has not won their championship for five years. Liverpool hasn't won it for over 20.

"They are big clubs - it is difficult. Just because you turn up doesn't mean you win. It is difficult to win."